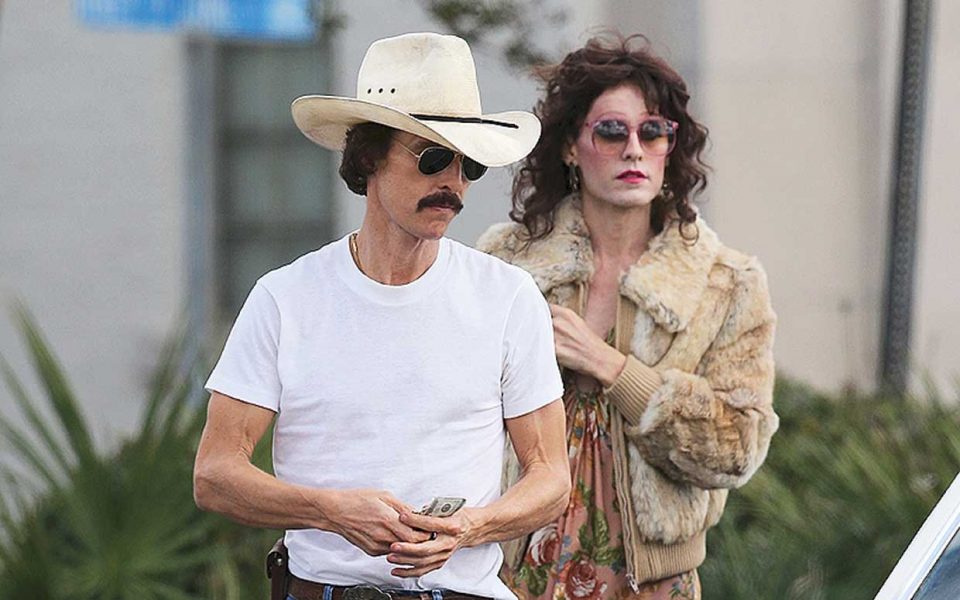 Here we go again. Does sex really sell? Well slammed in the face during the first scene we see the silhouettes of some people having. Now at first, I am thinking this is steamy Matthew McConaughey with some other people getting their freak on. Yum yum. I am sold I thought. Then we see that, in fact (yes although still McConaughey), it was Ron Woodroof! That is not the McConaughey I want to see in the very first scenes. Ron was not hot at all, and in fact, the total opposite. He looked like he was sick. Then again, I wonder if I hadn’t know him as hunky McConaughey in real life, maybe I wouldn’t have been so critical. Ok. He could have just been a skinny fella. I have many thin men friends.

Then we are shown how Ron mingles with his friends and get some insight into his character. Ron is just about every “ist” you can think of!  What a filthy mouth he had on him.  And he was supposed to be a Texan in the movie.  What happened to Bobby Ewing as in “Dallas”! Ron was more like a J.R.Ewing after watching Django!

Unfortunately Ron gets into an accident on his job as an electrician.  While in the hospital he is told that they had conducted some blood work on him and that they found he had HIV.  They said estimated he would have only 30days to live.  Ron dismissed their diagnosis as being wrong.  He tells them it must have been some mistake and they mixed his blood sample with a “c*ck suckers like Rock Hudson”. In the scene, you witness how the doctors seem quite afraid to touch Ron.  It was  as if they would attract the disease which is what people thought before knowing that HIV sufferers were the ones more susceptible to infection from others.

But at some point, his thoughts seems to get to him and he tries to find out if it could be true that he had the same disease that he thought only “gays” attracted.

He goes to the Library, and reads that it is not just a disease of homosexuals, but bi-sexuals and drug users to name a few. The reality hit him and he grasped the truth; that he might indeed be infected with HIV.

Before this point in the movie, Ron is a total asshole.  I would have thought it would be a good thing for the world if he wasn’t in it.  However, death can soften even the toughest of men.

Time is ticking and the movie gives a running time stamp as to how many days has passed.  Ron goes back to the hospital to talk to the doctors.  There he only finds Eve (Jennifer Garner) who he assumed initially was only a nurse.  Another one of his “ists”.  She informs him that she is a doctor and they go to her office to talk.

The news is not what Ron wanted to hear as he tries to become a part of the new AZT drugs trials.  This would mean he would have access to the drug which was only exclusively given to trial participants.  Eve tells him basically that no one could get him in on the trials and suggested he attended some support group meetings.

Then Ron say one of my favourite lines in the movie, ” “I’m dying and you tellin’ me to go and get a hug from a bunch of faggotts”.  That was so wrong of him to say, but at the same time it was so right.  I could imagine how I would feel being in his position.  I might have made the same reply, perhaps without the reference to “faggotts”.  Haha!

Soon enough Ron’s friends hear the news and they treat him how most people treated AIDS suffers at the time.

Strangely, Ron sits in front of some candles in what looked like a church which turned out to be a strip club.  There he recognises the hospital orderly where the AZT drug trials were being conducted.  Somehow, he arranges a deal for the orderly to deliver extra AZT drugs to him.  Sadly, the orderly, over time, tells him he can’t give him anymore AZT and gave him the name of a doctor in Mexico he should contact.

By this time, it is Day 28. Ron ends up in hospital yet again, and this time he shares a room with at first glance seemed like a beautiful slim woman.  Lo and behold it was not.  I was Rayon (Jared Leto)!  Come on people, was I the only one who had to do a double take?  He looked amazing as Rayon (his male name was Raymond).

Next Ron does go to Mexico and gets information about alternative drugs from a de-registered doctor who lost his US license to practice medicine.  Also, upon leaving the clinic, the doctor provided Ron with a shed load of alternative medicines not approved by the FDA to bring back to the US to sell.

In a far-fetched priest’s uniform, he tries to cross the border from Mexico to the US with a car load of drugs.  He is stopped at the border and crosses paths with the FDA officer who by the end of the movie shuts down his HIV/AIDS drugs buyer club.  He is let go because he says he brought the drugs in for his personal use.

However, Ron then tries to sell the drugs himself like a travelling salesman.  He didn’t seem to be having any luck until Rayon found him.  Rayon then ends up, after a rocky start with Ron’s prejudice, providing Ron with clients.  They eventually end up in all the places homophobic Ron never would have imagined he would be.  Serves him right!  Life can be ironic and how irony laughed at Ron.

After some opposition by the FDA again for selling the unapproved drugs, Ron did some research and he and Rayon set up the Dallas Buyers Club.  Instead of selling the drugs directly, people would buy monthly “memberships” into the club whereby they would be entitled to the drug for free.

Soon, Ron and Rayon end up as partners as well friends.

As this is happening, Eve is having doubts about the efficacy of AZT and becomes more sympathetic to the club.  She almost loses her job as she puts some flyers in the hospital about the service to counter the AZT trials.

Being hounded constantly by the FDA, Ron has to fly all over the world to continue to get supplies of non-FDA drugs for his clients.  He goes to Israel, Amsterdam and Japan!

It was hilarious to see him in Japan trying to make deals like a corporate pharmaceutical buyer.    On one of his trips back to the US from Japan, he stops in the bathroom to take more illegal drug which caused him again to be put in hospital.  This opened him up to the police for his drug use.  They pressure him into giving them information about the drugs, but Ron is steadfast and refuses.

They try to keep in the hospital, as he is ill, but Ron being defiant as always releases himself.  Then he tells the doctors and police around to “enjoy the view” as he walks out of the hospital room with only a hospital gown revealing his hairy ass.  I laughed out loud.  Sorry.

Eventually the IRS ordered an audit of the club.  This was the beginning of the end for the club, as well as there was a new law which stated only doctors could prescribe or give HIV/AIDS sufferers drugs.

Then we see a bit of Hollywood logic.  Hollywood logic you ask?  Yes.  Eve somehow ends up accepting a dinner “date” with Ron.  Yes, yes, it was an opportunity to get to know a bit more about Ron like the fact his mother was a painter.  But come on people.  Where in real life, do you think a doctor would go out with a patient, let alone an HIV/AIDS patient!

Rayon visit her dad at work dressed as Raymond.  Her father is a banker and when Ron encountered financial trouble, Rayon asked her dad for help.  There was a poignant moment when I thought, “Hot damn.  Jared Leto is making cry when he tells his dad God answered his prayers and gave him AIDS”.  Ah shucks.

Anyway, Rayon was able to get the extra cash to keep the club running and help Ron with his legal battle to keep all clubs open.

Ron takes another trip to Mexico for supplies.  While away Rayon because deathly ill and has to go to hospital.  Again it happened.  Leto plays a totally convincing dying AIDS patient and hesitated being taken to hospital because she said she didn’t want to die.  Good lord, it was emotional.

Upon Ron’s return from Mexico, he learns that Rayon is in hospital.  He goes to the hospital to visit Rayon, but it was too late.  Rayon had died.

6 months later, Ron goes to California regarding the ruling on his court case. Unfortunately, he wasn’t successful though the judge sympathetic to his plight.  He was told he couldn’t distribute drugs to anyone but was allowed to use the drugs for his own use.

In the end, we see Ron at the rodeo where it seemed to have all began; this time, not as an observer but a participant.  He got on the bull and took it by the horns (in more ways than one).

It was writing at the close of the movie that Ron died 7 years after his diagnosis of HIV.

The movie was based on real events. It is difficult to make judgement on what happened, but the screenplay did a good job interpreting the events.

Jared Leto was the big gun in this movie. He blew me away with his acting skills and I was completely consumed by his character. McConaughey did a great job as well deviating from his previous roles in such films as “Contact” and “The Wedding Planner”.

Share your thoughts on this review in the comments. Want to write your own movie review for Filmburner.com? Contact us!