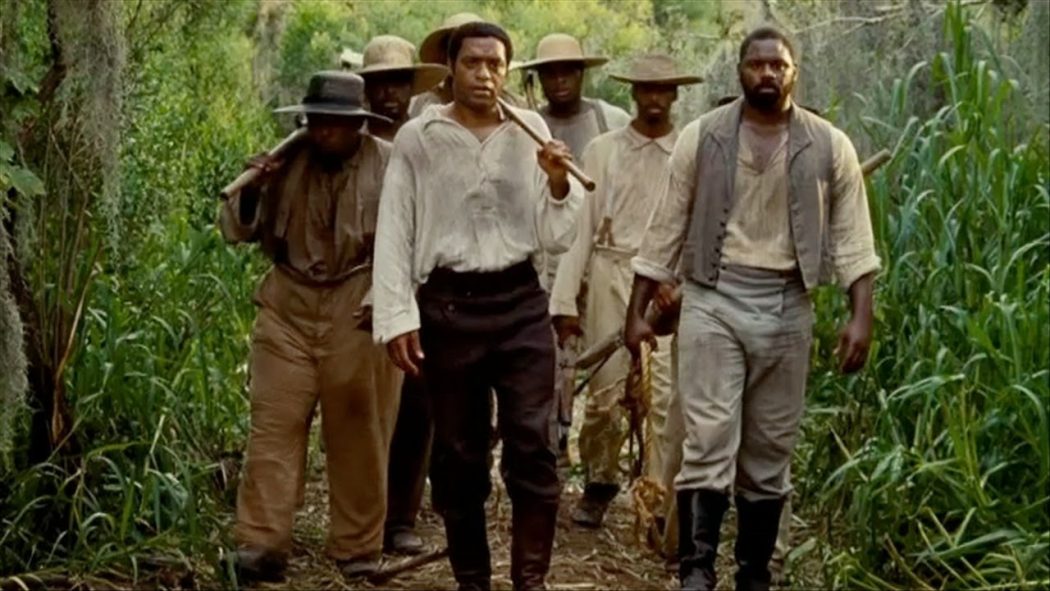 In 12 Years A Slave, during the very first scene, watching the lashing of Solomon Northup (Chiwetel Ejiofor), brought flashbacks of the opening scenes from Saving Private Ryan. So brutal was it from the beginning, which clearly was an attempt to hit the viewer with a powerful punch to provoke Hollywood film grade entertainment. But did it work and was it necessary?

I have to admit it drew me in, although I wanted to see more than sensational brutality, especially from a film about such a sensitive topic. It came across my mind how this film would compare to ROOTS in depicting slavery in such a manner as not to ward off white viewers. Whether it achieved such feat is a matter you have to take up with yourself.

The pace of the movie quickly gathered momentum after giving a short introduction as to “how” Solomon ended up a slave in New Orleans. Solomon, of course was born a free man in New York. He was a carpenter with a wife and children. In his spare time, he would play his fiddle to generate extra money for the household finances. While playing his fiddle at an event in town Solomon was approached by two men who lure him to believe they would increase his fortunes in Washington DC playing to the elite community. However, what the two planned was far more sinister. They had Solomon bound and chained in Washington DC and then sent to a slave auction to be sold.

From this point on, I started to lose myself into the psyche and world of Solomon – a man stripped of everything he knew and a facing a life of agony. The director, Steve McQueen helped this along with his not so frequent great scenes whereby he allowed the camera to hold the shot on Chiwetel longer to allow the emotion to simmer. It worked. Slowly as the seconds passed during one of his what I call “pause in play scenes”, you are drawn into the real emotions of what was happening. One example is the point when Solomon realised he was captured and possibly would never see his family again, I felt that moment too!

Briefly we had an appearance by Paul Giamatti as the slave trader who sells Solomon under the pretence that he is a runaway slave named “Platt”. For fear of reprisal, Solomon succumbs to the masters’ wishes and does not tell anyone that he is indeed a free man. It would be too dangerous for Solomon to let anyone know who he really was, because from the point of his capture he was a commodity. Anything that would jeopardise the price on his head could lead to his killing.

Solomon is bought by William Ford (Benedict Cumberbatch). I have to admit that initially I was not convinced of his southern accent. For those of you Sherlock Holmes fans, you would know what a gorgeous, dark, sexy British accent Cumberbatch has. Losing yourself into his character with a heavy southern drawl seemed a stretched for his talents….for now. He is still working on his American accent, as I also was not convinced of his ability to play a role as in American as he did in August: OsageCounty. However, as Sherlock he is amazing and I would dare challenge anyone who wouldn’t say he is otherwise a brilliant and talented actor.

While on Ford’s plantation, Solomon becomes a valued slave and seemed to be liked and even respected by Ford. But to the overseer Tibeats (Paul Dano), Solomon is viewed as overstepping his position as a slave.

As the tensions build up between Tibeats and Solomon, it leads to a fight where Tibeats tries to whip Solomon who in turn retaliates and thrashes him. Shamed, Tibeats seeks revenge and brings back a couple of his associates who try to lynch Solomon. Though Solomon survived, it was a day of utter hell for him as he had to remain in the noose for hours as his toes remain scarcely touching the ground so he can breathe before being let down.

Ford becomes aware of the tension brewing on his plantation involving Solomon. With his own problems to deal with (which was not expounded upon in the movie), he agrees to sell Solomon to Edwin Epps (Michael Fassbender) who owned a nearby plantation. This was after Solomon decided to try to confide in Ford about who he really was, and the slight moment when you hope Ford would be sympathetic to hearing what Solomon had to say. Stop! In reality we discover Ford’s between his role as a slave owner versus his humanity.

Now on the Epps plantation, Solomon meets Patsey (Lupita Nyong’o). Patsey is the favoured female slave of Epps who he repeatedly rapes. She also picks at least twice as much cotton per day as any of the other slaves including the men slaves. We are then showed the depredation of Epps character as he not only rapes Patsey, but physically abuses her. His wife, Mrs Epps (Sarah Paulson) is aware of the relationship between them, and frequently attacks Patsey.

While Mrs Epps, for some reason trusts Solomon after observing his competence, asks him from time to time to go into town and run errands for her. This includes going to a shop where she receives messages. Solomon over time sees this as an opportunity to try to get a letter to someone back home about his situation so he can be rescued. He uses the back of extra paper he received for Mrs Epps to pen a letter.

Unfortunately, the overseer betrayed Solomon and told Epps the whole story. Solomon by the skin of his teeth got away with not being killed by refuting what the overseer told Epps as lies explaining he was jealous of him. Luckily Epps believed Solomon, but only after Solomon had to burn the letter he penned. It was a poignant moment to know that his efforts for freedom had been dashed yet again.

The movie goes on and shows a compelling scene when Epps searches for Patsey. He later finds her and asks where she had been. Patsey explains that she was as Shaws plantation asking Mistress Shaw (Alfre Woodard) for some soap because she didn’t have any to wash herself. I have to say at this point in the film, I really believed Lupita was a real slave. On Oscar night seeing how gorgeous and modern she looked made me really see how persuasively she played the role of a slave.

Epps decided to punish Patsey and asks Solomon to give her lashings in public while naked. As Mrs Epps watched, Epps attempted to make a display of his authority by showing the implications of his displeasure with Patsey through retribution. Solomon wasn’t lashing hard enough, so Epps took the whip from him and lashed Patsey until her skin bled and flesh peeled away from her bones. Later Patsey asked Solomon to kill her. Solomon refused as he could not do it.

Digressing a bit let me state how much I love Michael Fassbender. From his obscure roles in Silk Stockings Sherlock Holmes, to X-Men, I find he is an absolute hottie and actor who can display real emotions. But like Cumberbatch, I felt the southern accent was a bit of a stretch for him. By the end of the movie you didn’t notice it so much, but knowing he has a British/ Irish accent, one could tell he thought a bit too much before reciting his lines. Similarly, it appeared that both Cumberbatch and Fassbender seemed a bit uncomfortable with their roles as brute slave owners. That is the undertone I felt.

Back to the plot, Epps hires Bass (Brad Pitt) to do some work for pay on his plantation. Bass was a wandering hired hand from Canada who didn’t believe in slavery. He made his views known to Epps who challenged him in a dispute as to his authority to think of slaves as his property. I didn’t find Brad Pitt oozing with realism in the way he portrayed the scene, but I found the content of the dialogue still interesting.

12 Years a Slave is a movie that deserves some accolade from a topical and artistic standpoint. The actors collectively brought the viewer into the antebellum period for the duration of the film. Indeed the subject matter is not for the faint hearted but I would recommend everyone to get past their emotional sensitivities for the greater entertainment of watching a historically relevant piece of media.

It isn’t widely noted that this movie is not the first to be made. In 1984, Solomon Northup’s Odyssey made for television was made and aired on PBS. I wonder if McQueen watched that movie before the making of 12 Years A Slave? Would he admit that?

Share your views on the film in the comments.  Want to write a movie review for Filmburner.com get in touch!